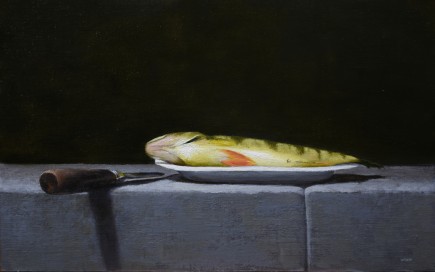 Sean M. Witucki (b. 1977) obtained his BS and MS in Visual Art Education from the State University of NY at Buffalo State. Sean is primarily a self-taught artist, who is always focused on developing his skills in the techniques of the traditional masters. He has been a drawing and painting instructor at the Buffalo Academy for Visual and Performing Arts since 2002. Sean reveals a personal and contemporary expression of landscapes and still lives which pay homage to his formative years. He spent much of his boyhood roaming the fields and woods on the edge of the Berkshire Mountains in Monson, Massachusetts. This is where his understanding of the natural world took its roots. This influence plays a major role in the subjects of Sean’s works. In 2016 Sean had the honor of becoming a Hudson River Fellow with the Grand Central Atelier. This experience has greatly influenced his work. Having moved in his teens, Sean has made a home in Western New York with his wife and two children.