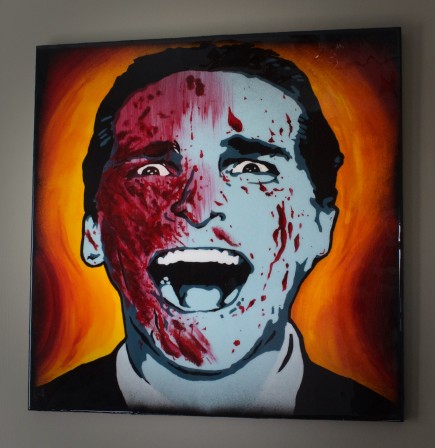 Johnny Flowers, a native of Buffalo, New York, began creating art in high school drawing tattoo designs for fellow students. Following high school, Johnny attended Daemen College for Graphic design and Illustration, at the same time beginning his tattoo career at the age of 19. This began what would become a rapidly progressing tattoo career -- winning multiple awards, and establishing himself as owner/ operator of 125 Art Collective Studio; one of Buffalo’s premier and top-rated tattoo studios. Taking a larger interest in his artwork, he began years of trial and error, experimenting, researching techniques and styles. In 2015 he discovered Pop Art & his largest inspirations can be found in the works of Warhol, Haring, Banksy, and Lichtenstein. Now better known as Johnnyink, and drawing the attention of many, his work can be found in homes of art enthusiasts and businesses like 125 Art Collective - Buffalo, NY, Taqo Restaurant -Fredonia, NY, e’s Bar - Manhattan, NY. He quickly became known for his eye-catching pop-art style paintings with one-of-a-kind color blends, detailed layering techniques, and use of different elements and mediums that pop off the canvas. With a packed house, Johnny hosted his first solo exhibition in 2018 “Redemption”, which was featured in Buffalo Rising and on Channel 2 News. Following his “Redemption” series Flowers has dove full force into evolving his techniques, skills, and inspirations to creating pieces for his next series “Ascension”. His “Ascension” Series Part I was completed in 2020 and was showcased at a small private viewing. Since Johnny is continuing to dive deeper into the art community- evolving his work through exploring new mediums, textures, and inspirations in preparation for his next exhibition.